Today I am here with Jay Wadsworth he teaches Jiu Jitsu in Jamestown, New York and he is also a police officer so he has an enormous amount of knowledge on self-defense as well.  Jay has developed a system that has helped him go against bigger guys and people that like to pass on the knees. Jay just showed me his guard that he has developed, it is called the 92 double sleeve guard.  This is a very interesting guard because it is not very common.  He uses a 2 on 1 but from the Z Guard.  Jay has so many options from this position, he can do arm bars, triangle, omoplata’s, and back attacks.  Check out the video below and then my breakdown on this position.

Okay guys, this position reminds me why I lobe Jiu Jitsu so much.  I play the Z guard very often and I have seen it played so many times but never like this.  Jay has a completely unique way of playing what he calls this “92 double sleeve guard.”  I like it because it is a guard that is based only on the grip.
Like you could see above, Jay can play this guard from closed guard, z guard, butterfly guard, or he can just put the feet on my hips.  The guard is just different because of the 2 on 1 grip that he uses.
Most of you know that I trained with Marcelo for years and taught at his academy in New York.  Marcelo has kind of a similar variation of this.  He loves to use the 2 on 1 grip and always sweeps people with it or uses it to take the back, get to the single leg X or the X guard.
This is what makes Jiu Jitsu so special, there are so many different techniques that you can learn, and get good

Jay is an awesome guy.  If you guys want to learn more on this position, Jay has an entire DVD on this guard called “92 double sleeve guard.”  It is really good guys, check it out below.  Also check out my free E-book here.  I put a lot of time into this and I know it can help your Jiu Jitsu! Oss! 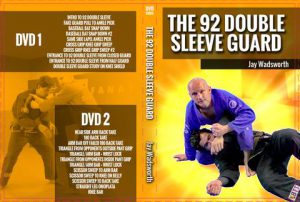