Today it’s a great pleasure to be here with Dean Lister. He is going to show us his omoplata escapes. In my opinion, he is one of the best grapplers ever, especially in no-gi. He has won the ADCC 3 times. He won his division once, the open division once and the super fight once.
Many times in competitions, I have seen grapplers get caught in omoplatas and they are completely lost on how to escape.
People often ask him if they should roll or do other things to escape an omoplata. He feels there are many options. He is going to look at a few options and why he doesn’t recommend those options. He believes there is no best way, instead you should find the best way for you.
Let’s see how Dean does his omoplata escapes:

He knows his opponent will push and pull with his legs, trying to finish the submission. He also realizes his opponent can’t keep the pressure on all the time. So, when he sees his opponent’s legs pull back, that’s when he ducks under and passes to his opponent’s other side.
One common mistake that happens when passing to the opponent’s side, is you get caught in a triangle. He avoids this by keeping his head high and on the outside of his opponent’s opposite leg.
He is also very careful that he doesn’t put his other arm over the top of his opponent’s other foot. It can be a very dangerous submission.
He has another option from this position. After he grabs under his knee, he sits back and faces his opponent. Dean can use his opposite arm to grab the toes of his opponent’s opposite leg. Then he ducks his head under his opponent’s leg and he arches his head back and pulls on his opponent’s toes and he gets a toe hold submission.
If he doesn’t get the submission there, his opponent will often freak out and pull his legs back. He waits for that reaction and he passes to his opponent’s other side.
When Dean places his hand under his knee and sits back, I can feel how strong his grip is. I can’t use my legs to finish the omoplata. If it was in a gi, I could grip his lapel and break his grip. However, in no-gi, it’s very hard to break his grip. He is in a position to attack my foot or pass me on the other side when I pull my legs back.
He stresses how important it is to keep your head up when you pass to the opponent’s other side. He keeps his head up and he uses his chest to put pressure on his opponent for the pass.
He considers this a power technique. Of course, there is technique, but you need to be strong enough to do it. He recommends lifting weights and doing jiu-jitsu to build up strength.
Common mistakes escaping the omoplata that Dean warns us to be careful about are, turning our backs to our opponent or rolling through. We can end up in bad positions such as the collar choke or armlock.
He has another option for a no-gi omoplata escape. He grabs under his knee, he stands up and shakes his arm out and he escapes.
The last omoplata escape that he uses, is to let his arm go limp. He then steps up and catches his opponent’s opposite leg in a foot lock.

Here is the breakdown of the key points for Dean’s omoplata escape:

Dean has just launched a new Instructional Series all about escapes. I watched and I recommend it to everybody. Click Here To Check Out: 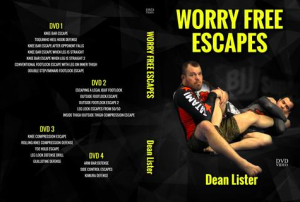