Guys I am here today with Tom Oberhue, he started Jiu Jitsu back in 93 here in the Portland area.  Tom got his black belt in 2005 by Chris Haueter.  I just finished a seminar here ate his school in Portland and Tom has been a Ribeiro Brother affiliate with Xande and Saulo for over ten years, people that I respect a lot by the way, but today Tom is going to show us a really cool choke from the side control.  He calls it the twin of the scarf choke because it is very similar.  Anyways guys, lets look at Tom’s Invisible Choke from Side Control below and then I will do a breakdown.

Breakdown of Invisible Choke from Side Control by Tom Oberhue:

Guys this choke is super super tight, I almost took a nap while he was demonstrating the technique on me.  There are a few key points that I think make it work so good that I mentioned in the video. Notice that Tom has the under hook.
The under hook allows him to pull me on my side initially, when he pulls me on my side, I think I can escape or maybe I think he is going to do the far side arm bar or kimura, so I hip escape.  When I hip escape, he moves his forearm right under my neck.  Even at this time, I am not sure what he is doing, I don’t realize it is a trap.
Then he goes to the north south position and he uses his knee to move my head more into his forearm.  Even with

out the knee it was super tight, but the knee just made it crazy tight.  Anyways guys I hope you like this position and get to tr y it out.  If you have not already download my FREE E-Book today and I think it will help your Jiu Jitsu! Oss! 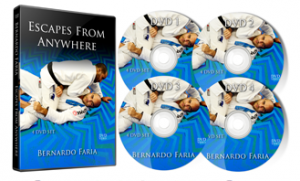