Today I am here with the great Ricardo Almeida, it is a huge pleasure for me to be with him.  We were talking and when I was a blue belt I used to really look up to him, I remember him fighting in the ADCC in 2003 against Jacare.  It was one of the best and most memorable matches I have ever seen, they went into 4 different overtimes! They went back and forth so much and now 14 years later here I am with Ricardo.  This is one of the things I love about Jiu Jitsu!  The community is very close! Ricardo is going to show us one of his favorite moves, it is a darce from knee cut when the guy is getting an underhook.

Okay guys so Ricardo is amazing at this position.  He was doing it to me earlier and I think the best part about his variation on the Darce is that he lets his opponent think that they have space, and then he does the inverted Darce from the bottom.  This is what I like, he is setting a trap so that his opponent thinks that they are free but when they take him down, it makes it way tighter.
The darce is a great move especially in the nogi.  The thing about it is a lot of people will get caught in it because when they have the underhook, they think they can take you down from the half guard.  I am a half guard player and the darce is something you have to be aware of anytime you are playing the half guard and you see them get into like a whizzer position.  If you just ignore their arm coming through it may be to late.
With this darce again, the best part is that he does it and then allows you to stay on top, it is

actually tighter when he does it from the bottom then when he applies from the top!  Anyways guys, I hope you enjoyed this technique as much as I do and try it out! Also, don’t forget to down load my free E-Book!  I think this can really help you guys with your training and Jiu Jitsu!  Also if you want to learn some escapes my DVD Escapes from everywhere is available, check it out below! 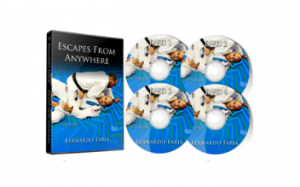