Today I am here at Chris Haueter’s school again, Chris is one of the first 5 Americans to receive a black belt in Brazilian Jiu Jitsu.  He received his black belt in 1996, I did not even start bjj till 2001, that is something crazy to think about.  Chris is also an artist and if you ever have the time to give him a visit in California, his place is one of the coolest Jiu Jitsu gyms I have ever been to in my life.  He decorated everything himself.  Today Chris is going to show us one of his favorite positions.  It is one attack that looks very similar to an arm drag but it is an arm lock.  Super cool attack, check out the video below and then I will do a break down.

Break Down of The Closed Guard Sequence by Chris Haueter:

So guys this is a great sequence from the closed guard. First off Chris is not only doing one move, he has an entire sequence that is based off of how his opponent will react to him.  This is very important in Jiu Jitsu.  You want to be able to have chain attacks so that if the first does not work, you do something else.
So when Chris starts he is initially looking for a simple arm lock, if I defend, which most will, he will start to look for a sweep, and when I defend the sweep he can attack the wrist or the arm again, if I defend a second time, he will attack the back.
This is an unusual set of moves so your opponent may be caught by the element of surprise, it is always good to surprise your opponent.  When you do things people don’t see coming, you will be able to catch them off guard.  The most important thing here is the fact that Chris is doing a sequence! When you have a sequence, whatever it is, your chance of success is better!
Anyways guys, this is an awesome move, try it out and see how it works, Chris is the man. Also, if you have not

already, down load my FREE E-book.  I really think this will help everyone with their Jiu Jitsu.  Chris also has a DVD called “Old School Efficient BJJ” check it out below! Oss! 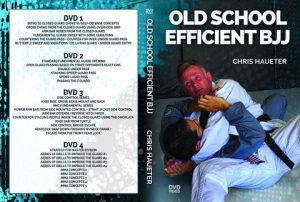