From “Over-Under Brother” to the Folding Pass
One of the most important things in BJJ is the ability to change one position to another, when you feel that your opponent is being successful defending the one you have started. The “Over-Under Brother” to the the Folding Pass are a great example of this. Every time I’m competing, when I am on top, my first goal is always to arrive in the Over-Under position, that it is the style of passing that I have been working since I was yellow belt (2002), but sometimes our first attack is defended and we gotta change to another position when we feel our opponent defended the first attack. Today I am going to give an example of this concept by talking about my match against Leandro Lo in the Worlds 2015. I hope you guys enjoy it.

I started trying to do the technique I call “Over-Under Brother”, it is a variation of the over-under pass, but instead of placing one of my arms over and the other one under, I place both over the legs. Leandro defended it very well, keeping his shin against my shoulder, being able to avoid me to close the distance. His shin acted as an effective frame against my shoulder, therefore, I could not close the space and apply the pressure. Once I felt that this technique would not work anymore, I immediately started sliding my left hand further. Pay attention on my left hand. (Yellow Circle). 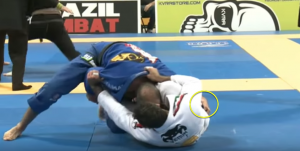 Comparing this pic below with the last one, you can see that now I’m a little closer, I got to close the distance a little bit. My left hand now is already even further; you can just see my fingers reaching behind his head. 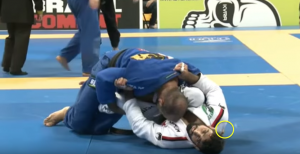 As I kept going, I got to reach even further, now, take a look where my left hand is… As my left hand got that further, I’m almost in the Folding Pass.

Here it is, just got the folding pass from the “Over-Under Brother” 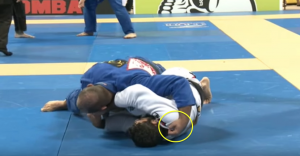 Probably the most important part of this transition, was the fact that I kept pushing and driving my weight on him, while my left hand was little by little getting further and further, until I reach the right spot to have the Folding Pass Settled.
In the video below you can watch the whole match against Leandro Lo. This situation starts at 3:30 into the match.
https://www.youtube.com/watch?v=NWt9GnkN_yA
Also here below you can watch myself teaching the Over-Under Brother, in the BJJ Super Deals Youtube Channel.